The gaming industry is booming.

By 2021, it’s predicted that the global gaming market will be worth over $180 billion annually, and this trajectory provides an unparalleled opportunity for Fiverr affiliates to boost their income! With so much interest in the gaming niche, and with so many businesses turning to freelancers on Fiverr for assistance, affiliates have the chance to capitalize in this area and take advantage of many other incentives.

Did you know that Fiverr offers an exclusive $50 CPA on game development Gigs? Refer a few of those, and that adds up to a substantial payout. Here’s what else the gaming Gigs can do for you:

Why Should You Promote Gaming Gigs to Your Audience?

More and more companies are moving into the gaming industry.

Aside from just video games, businesses are using gamification within their operations for training, selling, and tons of other initiatives, so the sector continues to expand. According to the European Mobile Game Market, there are over 2.5 billion gamers worldwide, and somebody has to provide those 2.5 billion people with fresh content to keep them buying and playing more.

Whether they’re console gamers, PC gaming purists, or mobile gamers, they want to be entertained. As the number of gamers increases, so does the demand for games. In fact, the Entertainment Software Association found in 2017 that 80% of the gaming industry’s revenue came from software sales.

Its come a long way since Pong and the growth isn’t slowing down—it continues to expand! As more companies—ranging from indie studios to tech giants—move into the gaming sector, they create a significantly higher demand for freelancers with skill sets that service the industry.

At Fiverr, game creation services have experienced massive and sustained organic growth over the last year. To support buyers and sellers and to really get behind this explosive growth, Fiverr has even launched a store dedicated to the gaming industry. It’s a store-like experience where buyers can easily purchase Gigs from matching sellers.

The idea is to fuel the growth of the gaming industry and make it easier than ever for buyers to find the right talented sellers for their game development needs.

Don’t miss out on this golden opportunity—get in there and start promoting Fiverr’s game development services.

Fiverr freelancers offer all kinds of services related to the gaming industry.

You’ll find everything from game development and QA to voice-overs and scriptwriting Gigs to promote. Developing a game on any platform is a complex, multi-faceted operation that requires a broad range of skills and the input of multiple people. Gamers expect more than plain match-three games or pixelated tennis matches. Even if they’re only playing a hyper-casual lightweight game that’s relatively simple, players want intuitive controls, a high level of engagement, and something that’s beautiful to look at.

To achieve a game that’s transparent is a pretty major operation. Here are just a few of the game development Gigs you can find and promote on the Game-Creation store promote as a Fiverr affiliate:

Those listed above are for game developers, but the opportunities don’t stop there. There’s plenty of freelancers offering their services to the gamers themselves. Types of services you can find on the Gamers and Streamers store include:

Recap: Why You Should Promote Gaming Industry Gigs as a Fiverr Affiliate

Because so many companies are recognizing the value of hiring experienced freelancers rather than full-time staffers, Fiverr’s talented sellers are busier than ever, tackling gaming industry Gigs, both big and small.

As a Fiverr affiliate, it makes sense for you to take advantage of this growth and maximize your earnings by promoting gaming industry Gigs. 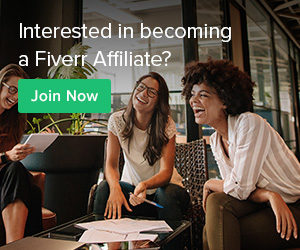